Life moves quickly and if you want to take advantage of everything that it offers and every opportunity that it hands out, you have to move as quickly as it does or you could end missing your one opportunity to become the person that you’ve always wanted to be.

But as fast as life moves, sometimes you need to slow down and think about the bigger picture, and your surroundings instead of always racing headlong toward the finish line. 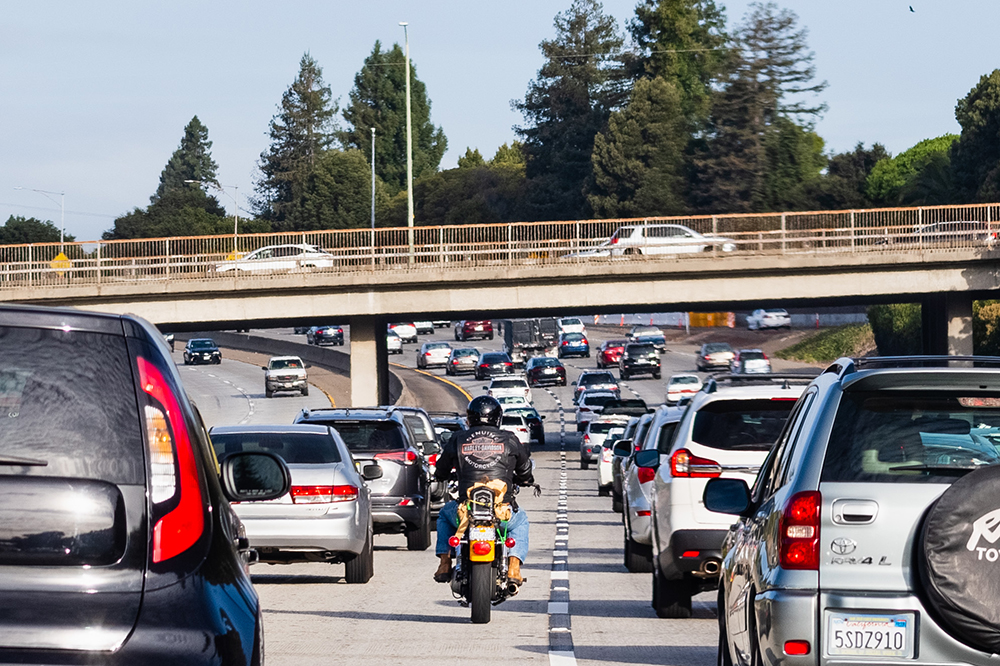 And if you’re a motorcyclist who ends up getting caught in traffic, and you’re brought to a standstill, as tempting as might be to swerve between the cars and trucks that are holding you up and create your own lane on the highway, don’t.

This is one of those times that you need to throttle back and remember that sometimes, you need to take things slowly and go with the flow instead of forging ahead and creating your own lane.

What Is Lane Splitting?

More commonly known as stripe riding and white lining by bikers, lane splitting is what happens when a motorcyclist rides between two lanes of slow-moving traffic or cars and other road vehicles that have been forced to come to halt on the highway or another major road.

While the more commonly adhered to practice of lane sharing, in which two motorcycles ride side by side in the same lane, is perfectly legal in Florida just like it is in every other state apart from California, lane splitting is illegal.

Even though the legality of lane splitting is currently being challenged in fifteen different states, Florida isn’t one of them.

If you’re caught lane splitting in Florida, you will be issued a ticket for breaking the law and, as a responsible rider, you’ll be fully aware that one of the consequences of being issued that ticket could manifest itself in the price that you’ll end up paying for insurance.

In other words, your insurance premiums will go up.

How Safe Is Lane Splitting?

Even though most motorcyclists believe that lane splitting isn’t just safe, but that it’s also a valid way to help ease traffic congestion and speed up the flow of vehicles on the road whether or not it is safe, has no bearing on its legality. The practice of lane splitting is still illegal.

That said, official studies have shown that the motorcyclists who believe it to be a safe way to travel, might not be wrong as they are far less likely to end up being hit by a car or a truck or truck from behind or to crash into a vehicle that suddenly decides to switch lanes, without indicating or paying due care and attention to whatever might be in the lane that they’re moving into.

The same studies have also shown that lane splitting could also provide an “exit strategy” for motorcyclists who might have found themselves trapped in a situation that necessitated them making a quick getaway.

And that providing that a rider doesn’t exceed the speed limit or travel much faster than the slower moving traffic that he or she was attempting to navigate, then they aren’t placing themselves at undue, or any further risk by lane splitting

But for every study that says the practice of lane splitting is safe for motorcyclists, there’s another that points out that as motorcycles are far smaller than cars, riders are exponentially increasing their chances of being hurt when they travel and swerve, between parked or slow-moving traffic.

And, ironically it’s the size of a motorcycle and its ability to ride between lanes that make it more dangerous for a rider to swerve between traffic.

A car attempting to move from one lane to the next and effectively closing the gap between lanes, or suddenly opening one or more of its doors, to allow the driver or passengers to attempt to see what was holding them up and had brought traffic top a standstill, could vastly increase the chances of a motorcyclist getting hurt while lane splitting.

As is the case with any auto accident, if you were the victim of another driver's folly while lane splitting, you and your insurance company will have to file a claim against the driver at fault and his or her provider in order to receive any potential damages, compensation, and costs from them.

But if you were lane splitting while riding through, or in Florida when you had that accident, this could prove to be more difficult to do than it is elsewhere.

The first thing to be aware of when you’re riding in Florida is that, statistically, the state has one of the highest rates of uninsured drivers on the road, so it’s wise to invest in an uninsured motorist policy before you do hit the road - speak to your insurance provider about it and they’ll guide you through everything that you need to know.

The second, and even more important thing that you need to be aware of is that Florida has a comparative fault system and damages are awarded on the basis of who was at fault during an accident.

If it was entirely the other driver’s fault, then you could be expected to be awarded the full amount that the accident warranted.

However, if you were lane-splitting at the time of the accident, as the practice is illegal in Florida this can significantly reduce the amount of damages that you could expect to be awarded for any accident that you were involved in.

You don’t have to be a rocket scientist to know that insurance companies will find any and all means at their disposal to reduce the amount of compensation that they have to pay out for any accident and challenging the legal position that you were in during said accident, can greatly reduce their costs and any potential damages that you might be awarded.

Your ability and skill as a motorcyclist and how safe lane splitting is or isn’t, isn’t a question that’s open for debate in the state of Florida.

The practice is illegal, and while you can expect to be handed a ticket if you’re caught doing it, the consequences of trying to get a little further down the road faster than the other vehicles on the road could end up being far more catastrophic.

So no matter how tempted you might be, don’t do it and always stay in your own lane.